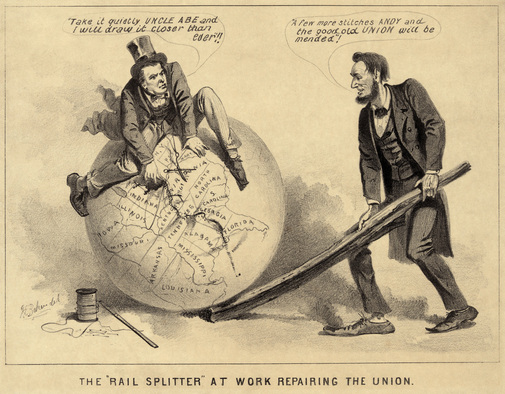 The Civil War lasted from 1861 through 1865. About 650,000 soldiers died and the country lay in ruins, especially the southern states. There would be much work to be done when the war was finally over. It would take many years to rebuild, and it would be costly. President Lincoln never got to implement his reconstruction plan. A man by the name of John Wilkes Booth assassinated President Lincoln about a month before the war ended.

Andrew Johnson was the Vice President, so he succeeded President Lincoln and became the 17th President of the United States.  Andrew Johnson was now in charge of Reconstruction. In the South, eleven large cities and 45 courthouses were completely destroyed. The farms, equipment, and animals were reduced by about half and railroads also lay in ruins, making travel difficult. Slaves were now free but were soon faced with the dilemma of unemployment (now they had to be paid for their work), homelessness, and limited skills.

As part of Reconstruction, a federal agency (Freedman’s Bureau) was created to help former slaves with food, housing, employment, education and other resources. Other Reconstruction programs helped to rebuild railroads, roads, and bridges.