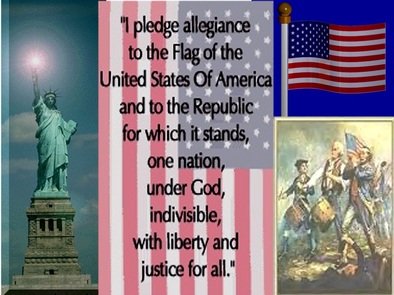 “I pledge allegiance”
(I promise to  be true)

“to the flag”
(to the symbol of our country)

“and to the Republic”
(a republic  is a country  where the people choose others to make
laws for them -- the government is “of, by  and  for” the people)

“for which it  stands,”
(the flag means the  country)

“one nation”
(a single country)

“under God,”
(the people believe in a supreme  being)

“indivisible,”
(the country cannot be split into  parts)

“with Liberty and  Justice”
(with freedom  and  fairness)

The pledge says you are  promising to be true to
the United  States of America!
History of the Pledge of  Allegiance

The  original Pledge of  Allegiance was written by Francis Bellamy. It was first given wide publicity  through the official program of the National Public Schools Celebration of  Columbus Day which was printed in The Youth's Companion  of September 8, 1892,  and at the same time sent out in leaflet form to schools throughout the country.  School children first recited the Pledge of Allegiance this way:

“I pledge allegiance to my Flag and to the  Republic for which it stands one Nation indivisible, with Liberty and Justice  for all.”

No form of the Pledge  received official recognition by Congress until June 22, 1942, when the Pledge was formally included in the U.S. Flag Code. The official name of The Pledge of  Allegiance was adopted in 1945. The last change in language came on Flag Day  1954, when Congress passed a law, which added the words “under God” after “one nation.”

Originally, the pledge was  said with the right hand in the so-called “Bellamy Salute,” with the right hand  resting first outward from the chest, then the arm extending out from the body.  Once Hitler came to power in Europe, some Americans were concerned that this  position of the arm and hand resembled the Nazi or Fascist salute. In 1942  Congress also established the current practice of rendering the pledge with the  right hand over the heart.

The Flag  Code specifies that any future changes to the pledge would have to be with the  consent of the President.
Powered by