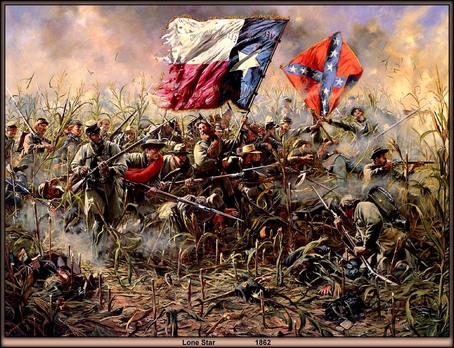 Civil War and Reconstruction in Texas

The United States Civil War was fought from 1861 to 1865 and the Reconstruction Era was between 1865 and 1877. The main cause of the Civil War was states’ rights. One right the states believed they had the right to decide the slavery issue. The disagreement between agricultural states in the South, where slavery was economically profitable on plantations, and the industrial North, where most people did not hold slaves, had reached the point of conflict several times. The South feared a national law forbidding slavery and a tariff on manufactured goods. Slaveholding states argued that the federal government had no right to make a law like that for states. They believed that states had the right to make their own laws regarding the slavery issue as slavery was not included in the Constitution as a power belonging to the federal government. Texas supported slavery because of its dependency on agriculture, and many Texans had migrated from the southern United States. A tariff on manufactured goods would cause the Southerners to pay higher prices for imported goods. Congress did have this power even though the southern states argued that they did not.

Texas joined the South, or what became later known as the Confederate States of America, in early 1861. Texans issued a declaration of causes for secession.  The document stated that Texas supported its "sister slave-holding States;" that the Federal government did not prevent Indian attacks, slave-stealing raids, and other acts of banditry and a justification of slavery. Texas governor Sam Houston opposed secession from the union and was removed after Texans voted overwhelmingly to secede in February of 1861.

Texans fought in many battles in the Civil War on the Confederate and the Union sides. Over 60,000, Texans joined the Confederacy. General Albert Sidney Johnston led Confederate forces (before the emergence of Robert E. Lee). He died at the Battle of Shiloh. Texas Rangers Ben McCulloch, John R. Hood (Hood’s Brigade), and Benjamin Terry (Terry’s Texas Rangers) were among those fighting for the Confederacy. Former slave Milton Holland and many Texas immigrants fought with the Union forces. With so many Texans fighting in the war, women and children had to be responsible for the businesses, farms, and homes . The demand for cotton and other crops was down because of the war and the shortage of labor. Life was very hard in Texas.

Throughout the Civil War, President Abraham Lincoln wanted to bring the nation back together. He made several offers to the South but to no avail. The Executive Order known as the Emancipation Proclamation, which freed slaves in the slave-holding Southern states, went into effect January 1,1863. This is thought by some historians to be a military move. However, because of Texas’s location, this news did not reach most Texans until one month after the Civil War was over. On June 19, 1865, General Gordon Granger arrived in Galveston Bay with 2,000 federal troops to to take control of Texas and to enforce the emancipation of its slaves. There, Granger announced the Emancipation Proclamation in Texas, freeing the slaves. This day became known as Juneteenth and is celebrated as Emancipation Day in Texas.

The Civil War was over in April 1865. However, the word was slow in getting to Texas because of its geography. The last Civil War battle was fought in Brownsville, Texas May 12 th and 13th, 1865. It was a victory for the Confederates, but it was too late in coming. The North, or Union, forces had already won the war. Confederate General Robert E. Lee had signed the surrender agreement one month earlier.

A week after the end of the Civil War, President Lincoln was assassinated.  His successor, President Andrew Johnson tried to continue the process of Reconstruction. This was not an easy process because some parts of the South had been destroyed by the Union forces. However, few battles were fought in Texas. There were few physical structures that needed rebuilding. The Texas government had to be restructured though. The state constitution had to be re-written allowing African Americans more freedoms.

To come back into the Union, the state constitution had to include the Thirteenth Amendment (1865), which freed the slaves; the Fourteenth Amendment (1868), which gave African Americans citizenship; and the Fifteenth Amendment (1870), which gave African American men the right to vote. The Freedmen’s Bureau was established to provide food, shelter, and medicine for freedmen, and most importantly opened the first schools for blacks in Texas. The Jim Crow laws were passed after Reconstruction to control the population of freedmen. Segregation evolved from these restrictions. It became illegal for black Texans and sometimes Hispanic Texans to eat in the same restaurants, stay in the same hotel, attend the same schools, or even be treated in the same hospital as the Anglo Texans. Black Codes and the Ku Klux Klan were used to enforce segregation
and keep blacks from taking part in politics.