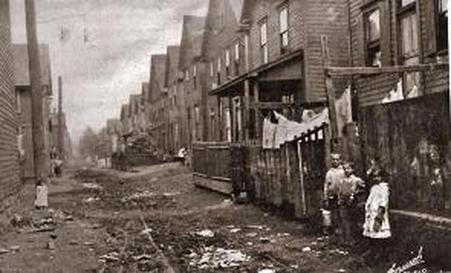 Immigrants Have Challenges and Triumphs in America

During the Reconstruction period and through the late 1800s,
many immigrants came to the United States. The war was over and the country was in the process of healing and rebuilding. People from other countries, especially from Europe, decided to move to the United States in search for jobs and opportunities. People believed they could make a better living and have a better life for their families in the United States, so immigrants spent what little money they had to travel to America. They left their countries because of unemployment, famine, war and other issues.

When the hopeful new immigrants arrived in America they settled in Northeastern cities where industry was quickly growing and factory jobs were available. These cities, such as New York and Chicago soon experienced over-crowding. There was a great demand for jobs. It is important to note that at this point in history the United States did not have a minimum wage law for workers.

Factory owners hired immigrants and paid them low wages. The working conditions in the factories were harsh, with little ventilation during the summer months and little heating during the winter months. There were no laws that restricted children from working. Soon, many children worked in the factories and were paid less than adults. Women were also paid less. It is also important to note that at this time in history, women did not have the right to vote.

People worked fourteen to sixteen hours a day and worked on weekends without extra pay. There were no safety standards and when a worker was injured on the job, he/she would be fired.

There was also the problem of prejudice. Some people were not fair to people whose language, race, and background were from a different country. There was prejudice against Irish, Germans, Italians, Africans, Chinese immigrants as well as others. People tried to live together in neighborhoods with other people who were just like them for safety, but it did not always mean life was easy.

In spite of all the problems, many of the immigrants thrived and made positive contributions to America.

Eventually, people who were reform-minded helped to pass laws that regulated labor, wages, and safety on the job. Children were not allowed to work until they were 16, and instead, children attended public schools. Also, people were allowed to work only a certain number of hours a day and were now paid a minimum wage.
Powered by