Major Battles of the Texas Revolution 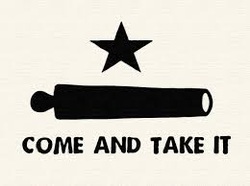 Differences between  Texas and Mexico progressed from the talking  stage to the shooting stage at The  Battle of Gonzales, generally  considered to  be the first battle of the Texas  Revolution.

Leading up to the conflict, the Mexican authorities sent a force of about 100 men to repossess a cannon that had been provided the residents of Gonzales for defense against Indians. In response to  the Mexican force, the Texans, under Colonels John H. Moore and J. W. E.  Wallace, loaded the cannon with scrap iron, aimed at the Mexicans, and fired the  shot that began the revolution.

After a short fight, the Mexicans retreated,  with one casualty, against no loss on the side of the Texans.

The battle flag used by the Texans at the Battle of Gonzales gained   considerable recognition as the "Come and Take It" flag. On a white banner was  a  picture of the old  cannon, painted in black. The flag acquired its name from the  words "come and  take it" printed below the cannon. 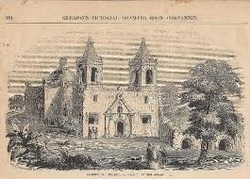 In December of 1835, San Antonio de Bexar was under the control  of Mexican General Perfecto de Cos with about 1200 soldiers from  Mexico. For  almost two months, Texas volunteers had camped near the town in a  virtual  standoff with Cos. The stalemate ended, however, when one of the Texas leaders, Ben Milam, returned  from a brief absence to find that the Texans were about to withdraw to Goliad.

Voicing strong opposition to the retreat, Milam appealed to the Texans with his now-famous words, "Who will will go with old Ben Milam into San Antonio?"  Some 300 volunteers responded.

Starting before daybreak on December 5, the Texans, led by Milam and Frank W.  Johnson, began their siege. Against heavy odds in both men and artillery, the Texans skirmished for the next two days. On December 7, Milam was shot and  killed. The death of their leader seemed to inspire the Texans as they engaged  in house-to-house combat that continued for two more days.

At daybreak on December 9, after four days of fighting, Cos signalled a Mexican truce. In exchange for the parole and return of Cos and his men to Mexico, the Texans gained all of the public property, guns and ammunition in San  Antonio.

During the siege, the Texans lost only four men killed (including Milam) and  fifteen wounded. They gained, however, one of the most important strongholds in Texas. Within a few months, the Mexicans would return to retake the town during the bloody Siege and Battle  of the Alamo. 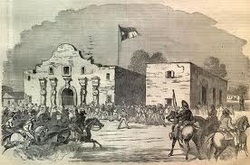 After losing San Antonio to the Texans during the Siege of Bexar, Mexican General Santa Anna  determined to retake this key location and at the same time impress upon the  Texans the futility of further resistance to Mexican rule.

With these goals, the vanguard of Santa Anna's army arrived in San Antonio about 23 February 1836. Some 145 Texans in the area took refuge in the fortified  grounds of an old mission known as the Alamo, under the joint command of William B. Travis (for  the regular army) and Jim  Bowie (for the volunteers).

Over the following two weeks, the Mexican forces continually strengthened to over 2000 troops. During the same period, a few reinforcements for the Texans answered Travis' famous Appeal for Aid and managed to penetrate enemy lines and enternthe Alamo  grounds, bringing the total strength of the defenders to about 189  men.

After periodic bombardment, the siege ended on the morning of 6 March when the Mexicans storm the Alamo fortress. During the battle, all of the Texandefenders were killed. Several non-combatants were spared, including Susanna Dickenson, the wife of one of the defenders, Susanna's baby, and a servant of Travis. Partly to reinforce his goal of terrorizing colonists in Texas, Santa Anna released this small party to inform Texans of the fate of the defenders.

Losses in the battle have been placed at 189 Texans against about 1600 for the Mexicans. 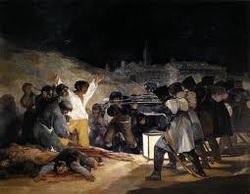 As part of  the Mexican invasion of Texas in early 1836, Antonio Lopez de Santa  Anna and his main force of at least 5000 men followed an inland route toward  San Antonio. At the same time, Mexican General Jose Urrea with some 900 troops,  left Matamoros and followed a coastal route into Texas.

The first town approached by Urrea was San Patricio, where on February 27 he encountered Frank Johnson and about 50 Texans. Johnson and four of his men escaped, but the rest were either killed or captured. A few days later, the Mexicans also fell upon James Grant and another 50 men, and all but one of the Texans were killed.

Citizens of Refugio, the next town in Urrea's path, were slow to evacuate. To provide assistance, James  W. Fannin, commander of forces at Goliad, sent two relief forces. The first  of these groups numbered about 30 men under Aaron King, followed by a larger  group of some 150 men under William Ward. Like Johnson's force, both of these  groups were eventually killed or captured by the Mexicans.

Meanwhile back in Goliad, Fannin and his remaining force of about 350 were called on to aid William  Barrett Travis and the Alamo defenders,  Afterwards, he was also ordered by Sam Houston to  retreat with back to Victoria. Due to indecision and carelessness by Fannin,  however, he failed to accomplish  either of these missions.

After a delay of about five days following Houston's order, Fannin finally began his retreat. It was not long, however, before the Texans found themselves surrounded on open prairie. Several attacks by Urrea resulted each time in the Mexicans being repulsed by the deadly fire of the Texans. By dusk, the Texans had lost about sixty men killed or wounded against some 200 of the Mexicans.

Still heavily outnumbered and with no water and few supplies, the Texans waved the white flag of truce the following morning. Believing that they would be taken captive and eventually returned to their homes, the Texans surrendered the morning of March 20. The were escorted back to Goliad as prisoners.


When news of their capture reached Santa Anna, however, he was furious that the Texans had not been executed on the spot. Citing a recently passed law that all foreigners taken under arms would be treated as pirates and executed, Santa Anna sent orders to execute the Goliad prisoners.

Santa Anna's orders were followed. On Palm Sunday, the 27th of March, the prisoners were divided into three groups, marched onto open prairie, and shot.  Thus, all of Fannin's command except a few that managed to escape and several physicians and others deemed useful by the Mexicans, were massacred, collected into piles, and burned.

Like the defenders at the Battle of the Alamo who  died only three weeks earlier, the men of Goliad served as martyrs for the  remaining forces in Houston's army. Three weeks later, the Texans sought their  revenge. Inspired by cries of "Remember Goliad" and "Remember the Alamo," the outnumbered Texans won one of history's most decisive victories at the Battle of San Jacinto. 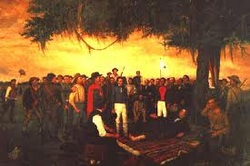 Sam  Houston and the meager army of Texas retreated eastward following the fall  of the Alamo in the spring of 1836. The troops were becoming increasingly  impatient, however, by the time they reached Buffalo Bayou, a few  miles  southeast of present day Houston.

On the morning of the April 19, the Texans crossed over and marched down the right bank of Buffalo Bayou to within half a mile of its confluence with the San  Jacinto River. Here, the army prepared their defenses on the edge of a  grove of  trees. Their rear was protected by timber and the bayou, while before them was  an open prairie.

On the following morning, Mexican General Antonio Lopez de Santa Anna came  marching across the prairie in  battle array. A volley from the Texan's "Twin  Sisters" artillery brought him to a sudden halt. Falling back to a clump of  trees a quarter of a mile distant, Santa Anna formed in line of battle. Colonel  Sidney Sherman, at the head of the  Texas cavalry, charged the Mexican army, but  accomplished little except to  inspire the Texans with fresh enthusiasm for the  following day.

The 21st of April dawned bright and beautiful. The main forces of the Texas   army were there, totaling about 750 men. They faced over 1500 of the enemy,
secure and flushed with pride at the offense they had enjoyed for the previous  few weeks against the Texans. Early in the morning, Houston sent Deaf Smith, the celebrated  Texas spy, with two  or three men, to destroy Vince's bridge over which the  Mexican army had passed,  thus cutting off their only available escape.

When Houston's long awaited order to advance was given, the Texans did not hesitate. When within seventy yards the word "fire" was given, the Texan shouts of "Remember the Alamo" and "Remember Goliad" rang along the entire line.  Within  a short time, 700 Mexicans were slain, with another 730 taken as  prisoners. The  battle for Texas was won.

A panel on the side of the monument at San Jacinto today underscores the importance of the battle after more than a century and a half of reflection:
"Measured by its results, San Jacinto was one of the decisive battles of the world. The freedom of Texas from Mexico won here led to annexation and to the Mexican War, resulting in the acquisition by the United States of the States of   Texas, New Mexico, Arizona, Nevada, California, Utah, and parts of Colorado, Wyoming, Kansas and Oklahoma. Almost one-third of the present area of the American nation, nearly a million square miles of territory, changed sovereignty."